The thin tent canvas let in enough light to see by, but not enough heat out and the enclosure was warm and stuffy. Two men and two women stood around a table slapped together from rough, untreated wood. The thing looked like it was held up with twigs and willpower. Scraps of parchment littered the working surface. As Faylor stepped out of the sun, all eyes turned towards him.

A man stooped with age hobbled a few steps towards him, “I’m John. You must be Faylor.” The man said, extending his hands in a sign of greeting.

Faylor nodded, but didn’t answer. His eyes slide past John towards the man standing behind him. Everyone he’d seen at the con so far had been old, retired. But this man had to be Faylor’s age or younger.Aside from his age, Faylor registered several other strange details about the man. His clothes were fine and meticulous. The seams were perfectly aligned and the stitchwork was masterful. Faylor thought he should ask the man who his taylor was. Next time he needed to take the master’s clothes to be mended he would have to take it there, then Faylor remembered he wouldn’t be returning to his normal duties anytime soon. The young man stood still at attention like a servant, but the tilt of his jaw and the steadiness of his gaze suggested confidence unbefitting a non-magic user.

“Ah, may I introduce Marcus, our associate from abroad.” John said as he followed Faylor’s gaze, “And the two fine young ladies are Givette and Carnith. They help me keep the place running.”

John smiled at the two women as he spoke. Givette returned the grin with a brief twitch of her lips while Carnith’s lined face dug into a more solid frown. An awkward silence filled the room as everyone waited for someone else to speak.

“Let me see if I can’t find someone to give you a bite to eat, dear.” Givette bustled past Faylor, stuck her head out the tent, and hailed someone nearby.

“Yes, we were all concerned about your mission going astray.” John added, “But three of the other assassinations went off without a hitch.”

“Oh!” John wheezed, his face splitting into a smile, “I suppose you thought you were the only mission we had planned…”

Marcus put his hand palm down in front of his chest in a silencing gesture and John trailed off. Givette returned and pressed a hunk of bread and little gobs of cheese and smoked meat into John’s numb hands.

“Listen, son, I know this must be a lot to take in, but we’re at war here. A war to liberate your people, and you are in a position to play an important role.” Marcus rumbled. Faylor noticed John and Givette relax into familiar poses of subservience as Marcus spoke. Carnith continued to stand straight, with steal in her spine, watching the younger man like a weary mother bear.

“Perhaps you would give us a moment, Marcus. It might be better if Faylor’s countrymen acquainted him with the situation. It is supposed to be our war after all.” Carnith spoke in a quiet voice hardly louder than a whisper.

“Of course, ma’am.” Marcus inclined his head slightly to Carnith before turning on his heel and marching out the door. Faylor watched him go. As the tent flap fluttered shut he caught a glimpse of an elderly couple walking hand in hand  through the tent village. The woman had a basket of laundry under her arm, and the man had a fishing rod slung over his shoulder. It didn’t look like a war.

“I don’t understand why you distrust Marcus so thoroughly. Surely by now you see the outland army has our best interests at heart.” John snapped at Carnith.

“No, I think they have our best interest at arm’s length.” Carnith responded, “The enemy of my enemy is my friend is a poor relationship to put your faith in long term. We might both want to oust the wizards from power, but I expect that is as far as our goals align.”

John rolled his eyes and threw his arms into the air, “Isn’t that enough?”

Faylor’s mind spun with added information as tidbits trickled through his stressed mind. Before the argument could flare up again he reiterated his question, “What other assassinations?”

All three heads wheeled back to him, “These fellows decided – based on Marcus’s advice – that simultaneous assassination attempts on five powerful wizards would be a good way to destabilize the country, annoyance our existence, and get the common folk to take the independence movement more seriously.”

“And three of the volunteers succeeded! We’ve struck a mighty blow against the oppressors!”

Carnith shook her head sadly, “And four of the volunteers died for their efforts.” Faylor wondered what happened to the surviving volunteer before realizing it must be him.

“It’s a war!” John shouted, flinging his arms back into the air, “And those young people died brave and wonderful deaths for the cause. In a generation they’ll be heros.”

“In a generation the outlanders will have invaded and we’ll have traded one master for another. They’ll be remembered as fools.” Carnith spat.

“Why don’t the outlanders invade now?” Faylor asked. He thought Carnith must be making a mountain out of a molehill. If the outlanders wanted to help depose the wizards and free the common people, why not let them?

“Their technology won’t work here. You turned the radio on near a magic-user, correct?” Carnith asked him.

Faylor nodded, “And his magic failed him completely. If the outlander’s have such wonders, they could surely destroy the wizards anytime they wished.” John beamed at his speech and nodded encouragingly.

“Did you hear anything other than static through the radio when a mage was near?”

After a moment of thought, Faylor admitted he hadn’t.

“The outlanders are using us.” She concluded. 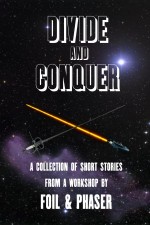